OmniRide is celebrating its 35th anniversary. And in honor of our anniversary, we thought that we would pause a moment to celebrate and to take a look back at our achievements and milestones to see how far we've traveled on our 35-year journey. We will host a 35-day celebration, ending on September 15, 2021.

Weekly contests... be sure to check back weekly

We’ll run several fun contests that will also share interesting facts and visuals related to the OmniRide Family of Mobility Services.  Maybe you’ll learn some tidbits along the way.  Be sure to check back weekly and click the “Weekly Contest” button on the menu on the right. You could be a winner!!

How good is your eyesight? Test yourself and you might be a winner.  Our anniversary logo is hidden on ten pages within the site. Hunt about the site and see if you can find them. As you cruise through the site, you may learn new things about OmniRide and our services. Just click the “Digital Scavenger Hunt” link on the menu on the right to submit your entry. 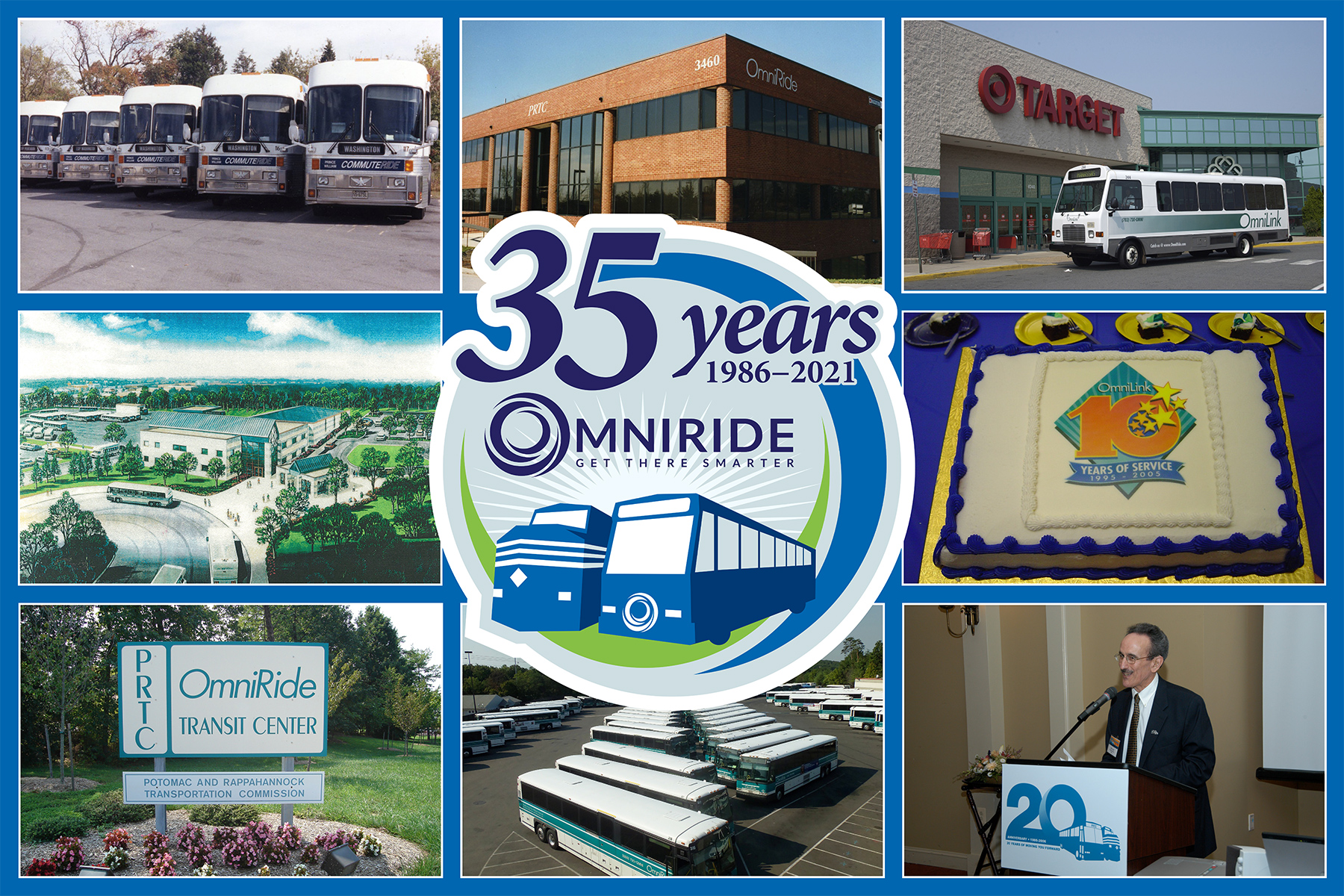 A Look at PRTC Through the Years

The inaugural meeting of the Potomac and Rappahannock Transportation Commission was called to order on August 6, 1986, at the Log Cabin Restaurant in Stafford County. At that time, the primary goal of the agency was to establish commuter rail service, or the Virginia Railway Express. In 1990, PRTC assumed responsibility for operating the COMMUTERIDE commuter bus service and ridematching program for car and vanpoolers from Prince William County. By the fall of 1990, PRTC's average daily ridership exceeded 2,500.

The early 1990s were filled with planning for the Virginia Railway Express and the local bus service that would later be named OmniLink. In June 1992, the first VRE trains rolled down the tracks, providing service to 16 stations. By 1995, PRTC had feeder bus service on four routes serving the VRE stations. OmniLink local buses began operating in the spring of 1995 along three corridors, expanding travel options for many area residents. At the time, OmniLink was considered a unique "flex-route" system, allowing buses to serve locations up to 3/4 mile off the standard route. By fall of 1995, OmniLink expanded service, starting two more routes to serve Manassas and Manassas Park.

In late 1997, the agency moved to the current Transit Center; for the first time, administrative, operational and mechanical functions were under the same roof. The garage and bus yard provided ample space to maintain and store PRTC's fleet of 77 buses, with room for growth. New services were established in the late 1990s - Cross County Connector and Prince William Metro Direct - and OmniRide services were expanded in response to increased demand during Mixing Bowl construction. Meanwhile, OmniLink switched to a more convenient, automated scheduling system for reserving off-route trips.

In 2000 and 2001, PRTC began the modernization of its fleet with the arrival of 13 new OmniRide buses and 16 OmniLink buses, providing a more comfortable ride for passengers. In just a few short years, PRTC went from having one of the oldest bus fleets in Virginia to having a fleet with an average age of just four years old.

Continuing to steadily grow, in December of 2002, OmniRide surpassed a calendar-year record by carrying more than 1 million passengers. In 2003, PRTC's overall average daily ridership surpassed 7,500, fueled in part by the addition of Saturday OmniLink service along three routes.

A sixth OmniLink route began operation along the Route 1 corridor in 2005, and PRTC introduced OmniRide service to Rosslyn and Ballston in 2006. In 2007, bicycle racks were installed on all local and Metro Direct buses - a convenience for passengers wanting to ride their bikes on both ends of their trip. VRE began making improvements to Crossroads Yard and dedicated new parking garages at the Manassas Station and Burke Centre in 2007 and 2008.

PRTC began accepting SmarTrip cards in 2008 - a simple electronic form of payment that has benefited numerous regional transit providers and their customers. In 2009, PRTC began operating Tysons Express, a direct service between Woodbridge and Tysons Corner funded by Virginia Megaprojects to help mitigate traffic during HOT lane construction. The agency also updated its image in 2009 with a new set of bold, easy-to-read bus-stop signs to replace the faded ones that had been on the streets for more than 10 years.

PRTC and VRE continued their growth during 2018 – 2021. VRE cut the ribbon in 2018 on the platform extension project at the Lorton Station. The agency also partnered with regional stakeholders and assisted in development of the Long Bridge project's combined environmental impact statement and record of decision that will permit VRE to operate more efficiently and expand services. Last but not least, VRE recently executed an $80.6 million contract for the purchase of 21 new bi-level passenger rail cars, with an option to purchase up to 48 additional cars.

In 2018, PRTC initiated a rebranding campaign.  Our logo was refreshed, we selected new agency colors and all our services were rebranded under the OmniRide name.  The commuter service became OmniRide Express, OmniLink became OmniRide Local, Metro Direct became OmniRide Metro Express, the Cross County Connector became OmniRide East-West Express and our ridesharing service went from OmniMatch to OmniRide Ridesharing. We initiated a bold, new paint design for the fleet, we've been retiring our teal and white look.

That same year, a new OmniRide Express route began between Haymarket and Rosslyn/Ballston. In 2019. The organization also began service from the new University lot in Gainesville.

OmniRide broke ground in more ways than one between January 2019 - June 2021. The organization literally held a groundbreaking on the Western Bus Maintenance and Storage facility in January of 2019. Starting with the June 2021 service change, buses were dispatched from the Western Facility for the first time. This new facility allows for OmniRide to improve and expand transit services for western Prince William County residents and the business community, and will help to reduce congestion along the I-66 corridor.

In 2020, OmniRide was awarded the prestigious TSA BASE Gold Standard Award. This is the top honor given by the TSA for demonstrating outstanding performance in enhancing security programs.

Looking to the Future

VRE is partnering with the Commonwealth on its visionary $3.7 billion Transforming Rail in Virginia program, which will enhance commuter and passenger rail service over the next decade. This includes participating as a funding partner in design and construction of a second rail crossing over the Potomac River to relieve a major bottleneck on the East Coast, and expanding service by adding a new roundtrip train on both the Fredericksburg and Manassas lines and exploring the possibility of bi-directional and weekend service.

VRE is partnering with the Commonwealth on its visionary $3.7 billion Transforming Rail in Virginia program, which will enhance commuter and passenger rail service over the next decade. This includes participating as a funding partner in design and construction of a second rail crossing over the Potomac River to relieve a major bottleneck on the East Coast, and expanding service by adding a new roundtrip train on both the Fredericksburg and Manassas lines and exploring the possibility of bi-directional and weekend service.

See Our History in Pictures

Browse through our photo gallery at some memorable images over the past 35 years.