What is OmniRide Ridesharing?

It's the FREE, personalized ridematching service that will help you find a carpool or vanpool! OmniRide Ridesharing uses the Commuter Connections database to link commuters who live and work near one another and who have similar work hours. Just fill out the Match Request form, and we'll send you a list of potential ridesharing matches. Many carpools and vanpools start at commuter lots within the Prince William area, bound for destinations throughout Northern Virginia, the District and Maryland.

Carpool or Vanpool, What's the Difference?

See the Commuter Programs page for lots of helpful information about Ridesharing programs and incentives.

The casual carpooling that's popular in the region is known as slugging. To take advantage of faster commute times in the Express Lanes, commuters form on-the-spot carpools. Drivers simply pick up enough passengers going to a specific destination to use the Express Lanes without having to pay a toll. No money is exchanged yet everyone wins because the driver has a faster commute and the passengers get a FREE ride.

Slugs typically catch rides at local commuter lots and at or near major employment sites in Washington, D.C. and Northern Virginia. Visit Slug-Lines.com or sluglines.com for more information.

Whether you slug or commute in a carpool or vanpool, signing up for Rider Express alerts is a great idea. You'll receive email and/or text message notifications of changes affecting OmniRide's service. 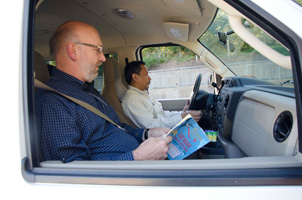